You are at:Home»Crypto»How to increase AMD Speed of about 80%+? Get faster stable AMD mining! Anti-Hack AMD!

This project is dead and has no special value until further notice, there is still something underneath windows 10 that reduces the mining operation of Monero to 1200h/s after some time. Even after a restart of the miner;

Last update: Nothing still works the perfect way… even coinstaller which is co-installer. 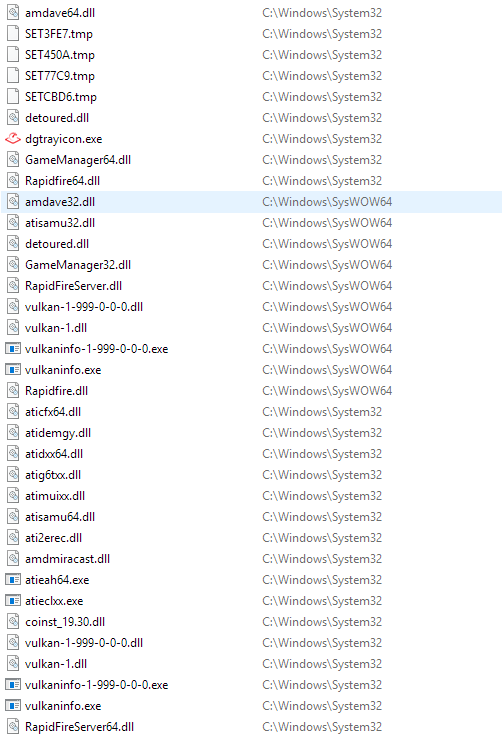 Even in syswow64 files need to be deleted;
But after then 3 task manager applications need to be turned off:
DEmanager, AMD Event Handler, and AMD client handler. Even that following this might unleash a destabilization of Monero mining reduction:

That was the last test to delete these files as well. Things take time until they quirk low hashrate

Update 26th found the source: The coinstaller service .dll file in the driver is the one that reduces the AMD speed of mining after you have mined for the first time, then after some time it might turn off your mining, and as well thus on restart of miner you don’t get maximum speed.

Last update: Simply delete all coinstaller and coinst dll files and directories. there might be one wimst.dll file that needs deletion as well

This whole tutorial is on VEGA64.

Though AMD stated they don’t support mining with their equipment.

The last update advanced if you would want to proceed “We been working on the driver inf files!!!”That was the old answer! Now it does not quirk.

There might be something in the driver.inf file which you want to remove to have this stalling off:
“coinstallers”. Meaning you gotta search all content with coin and remove it even the .dll loading sentences. It might be a staller that inhibits reduction of speed at time after time.

Another simple option might be to find the file coinst_19.30.dll and delete it from your system. That is for the 19.11.3 driver.

The desktop will most likely function without a lag through this type of procedure, but you still don’t want to install radeonsettings.exe if you want there might be a procedure to lag your system insane, though this is an old obsolete procedure that you might not after this need.;

To be able to set up right you need to disable the signing of the drivers that go for removing coinst_19.30.dll from the driver, you don’t need to remove services unless you want 20h/s more or at least stable mv and lowest as possible with driver monitoring, not service monitoring.;

The restart and run your own edited .inf file, this is how more we don’t need to help with.
But it does actually not quirk as the rest of the processes:

We turned off all services: Thus for VEGA64 We left none alone with “probably for ETH mining”:
[ati2mtag_Vega20.Services]
amdkmdag

Removing all services will inhibit no monitoring of VDDC voltage, thus setting it to 1000mv your system will apprehend and start to run it as lowest 1075, thus with variable changes, that way is a solution to run as lowest possible, but you can’t run 900mv. As it anyway wants a minimum of 1075mv. Even you set it at 1000mv.

You might want to run ccc2_install.exe first found in packages/driver of AMD install. Turn off fastly as it shows exe execution with Task Manager. Then you have the folder at c:/amd/WU-CCC2 you delete most folders, leave in CN these folders: CCCslim and cnext. AND VC15* two folders, then run WULaunchApp.exe

Remember to install drivers with the device manager. Then you can install radeonsettings.exe. Then probably all you need to do is to delete all .exe files in AMD/cnext in program files, which are not cncmd.exe and radeonsettings.exe with fast delete file bottom at this page tutorial;

I believe the program to apprehend your system is in ccc2_install.exe and that what you need to do likely. Since it took many hours nesting the problem and with setup.exe you need ccc2_install.exe to be at a place unless it won’t install the drivers, but a workaround device manager install was all that needed.

Just remember to run AMDCleanUtility first in one of the BIN64 folders before you start this.

Update 25th: at the file ccc2_install.exe you will need 7zip! That way you can extract the files out of that file and have these two: ccc-slim.msi and ccc-next64.exe that way you don’t install any hack to radeonsettings.exe. Whith this option:
msiexec.exe /quiet /norestart /i ccc-slim.msi
msiexec.exe /quiet /norestart /i ccc-next64.msi
Secondly, you might want to use the removal utility with AMD called AMDCleanutility.
Thirdly you don’t use the setup files, you just install the drivers direct into device manager and no setup.exe to run.
That way it might work, this is the latest.

Update the latest: There is still something in the memory that works against this project after 20 minutes it quirks. Unless there is something, its impossible for me to apprehend the system of this. Thus trying my patience on this, there are still some files to remove, which, I don’t know fully. Trying still.

Update 25th evening: Finally got my 19.30.31.18 driver working… Though PCIbus might need to update in the device manager. By all the deletions system now doesn’t quirk that much on the latest driver… But for radeonsettings.exe to be working is really hard. Anyway did get 2000h/s Monero mining on latest 19.11.3 driver, with as well just memory tweaks and only that 1350mhz clock and 1020 memory at 1075mv x 800mv

Update 25th: The new proceeding has to become tweaking the way to remove all AMD installation files that not fully necessary are installed. Which way, you have to tweak the AMD installation files, and firstly before running the AMDCleanupUtility.exe in folder BIN64, to clean out all files that might be happening of zappening. You don’t need to run SAFEMODE. Then to prepare the whole installation by deleting in folder Config of AMD installation files the first four files if you search by name; AMDCOMPUTE.xml, AMDLinkDriverUpdate.xml,AMDRELAUNCHER.xml, AMDUpdater.xml
Following with additional 5 files; InstallUEP.xml, DLMServer.cfg. ModifyLinkUpdate.xml, workaround.xml, installmanager.cfg

“last note RadeonSettings quirk the system still… even for that long below hack” But making 19.11.3 drivers into; 19.30.31.18 is still possible… As the above procedure auto-make the version name. “You still gotta remove in Packages folder I believe” But you can’t run with RadeonSettings.exe still.

I believe these additional files need to be deleted. Though finally maybe finally this system truly works.

Actually, by the removal of these files the system worked, but I believe there aren’t few files on this process working together: 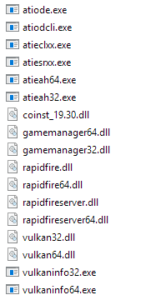 You might want to turn off AMD in services as well “probably necessary”:

After this proceeding, I have not tested RadeonSetting.exe with the above feature, it might work. But there are several unneeded files that run as perhaps amddow.com and amddrsv.exe

If you want to install the RadeonSettings, you might need the whole process of this tutorial; it might be several files with RadeonSettings that as well install the hack. But I believe that the first four files that are hidden and as well with different proportions of installation this might be the files that were causing a problem due to AMD reduction speed at especially Monero Mining. Thus at the end, giving 1200h/s and at first 1900-2000h/s but normalizes at 1900h/s.

Having this above procedure, you might want to restart miner until you have the right hash rate. Sometimes it will show wrong, but still, there is a problem longly in the AMD software to not fully work correctly.

If you need to install RadeonSettings, I recommend this process: You might need to edit out as well in BIN64 – file: ccmanifest_64.xml Download the edited:
Remove <package> to </package> for amddvr64.msi and wvr64.msi.

The speed problem occurs when you don’t mine, and even after some time, it drops considerably more.
With the above hack, you might already be at the port of to no longer need reinstall/restart.

Remember to as well remove all files in the Packages/Apps folder of AMD installation; some might cause a problem, don’t know what the final verdict of this working was. 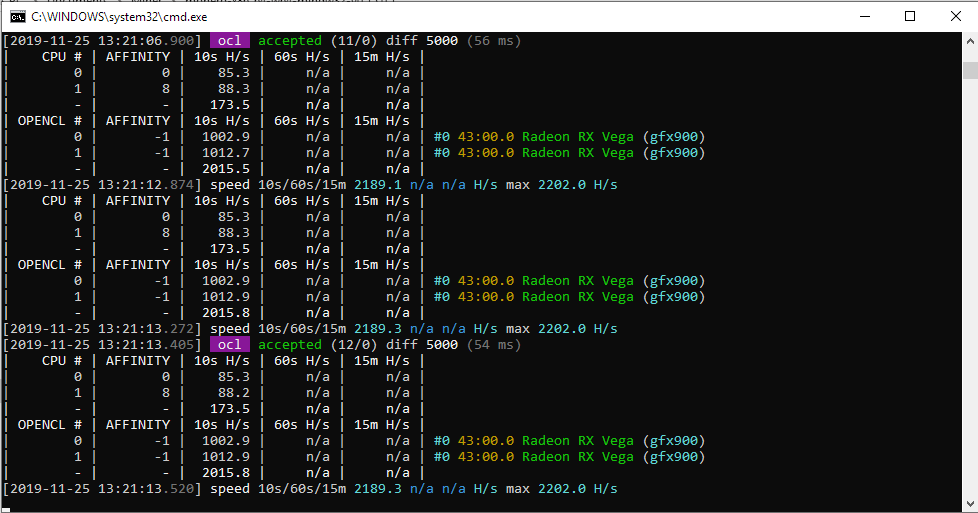 After some time it drops but does not get below: 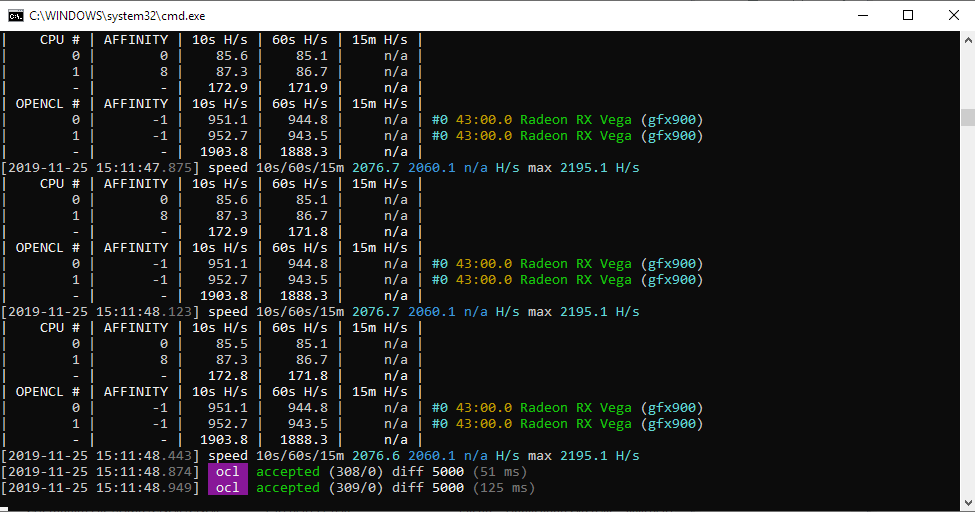 Anti-Illuminati memo: Sold as-is. After completing all deletion of all files, and as well config files edits:
Your driver number from 19.11.3 will become:

By deleting specific files that come with the driver, you might be able to proceed and increase your mining speed with approximately 80%. To increase speed is by deleting individual files of AMD Drivers that I genuinely believe are used to something else than that were ever-ever known.

I guarantee at least 50% to good to be true? Well, I posted about this on Twitter! Til I found out how to anti-hack this, thus giving VEGA64 approximately better speed than Nvidia 1080ti!

With the newest @AMD Driver 19.11.3, you get Botnet and 50% reduction of your graphic card with AI intelligence to use your backdoor.

For mining, you get a 50% reduction in speed! And it's really vibrating special it even omits your firewall! As it might duplicate desktop #hack pic.twitter.com/I6PLjjoAZd 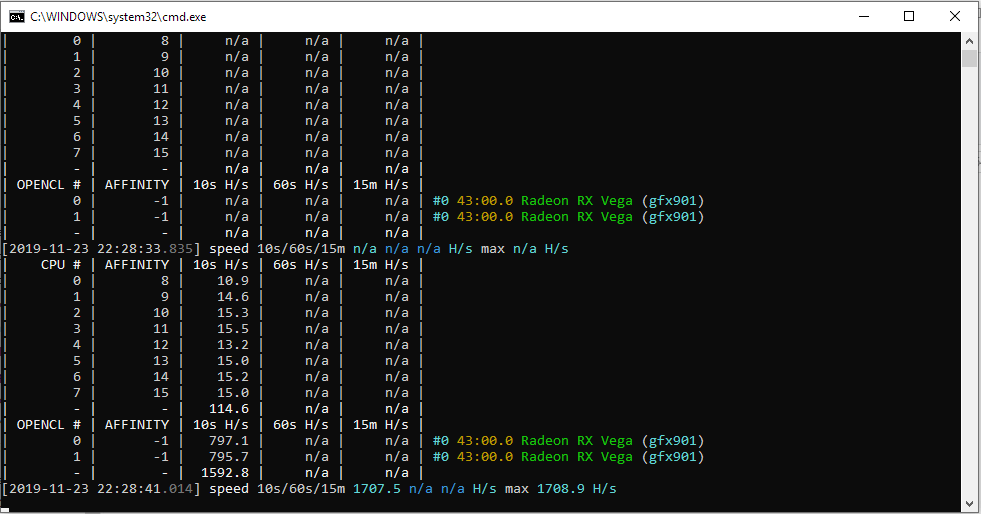 So you will have to place the runamd.cmd into the right folder thus, then after installation, 100% of your AMD drivers have become you need to run it through CMD “windows command” fast enough at the start.

Don’t run the file directly as an administrator in explorer but use CMD! 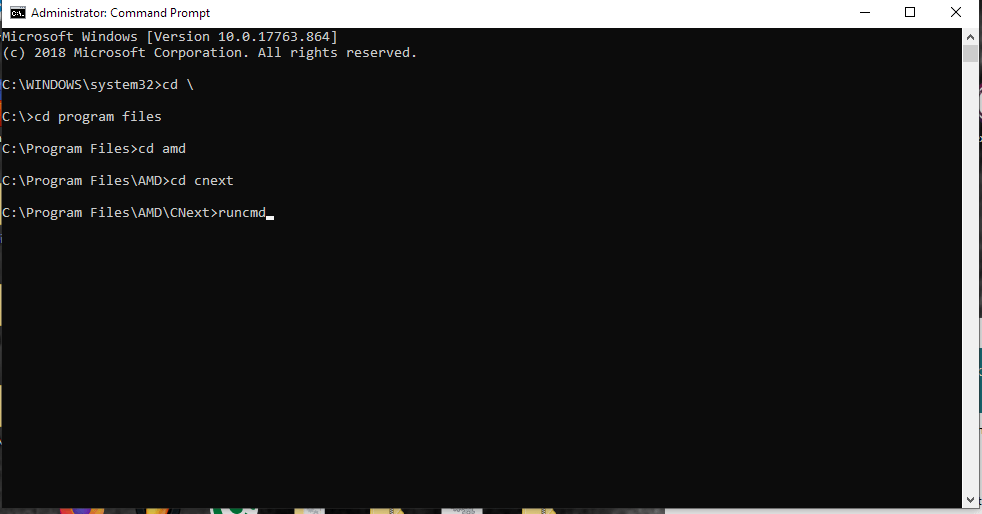 So after you have done this process, you might want to restart your computer, but it might now become: “this is with overclocking” 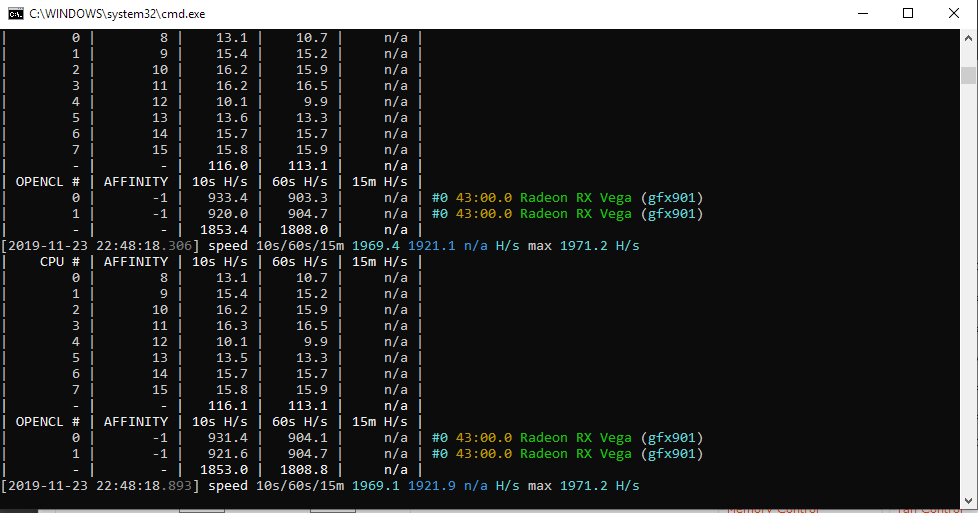 This is my new value towards after fresh system restart; even the processor started to working faster. And my laggy screen became normal! My final destination to a unique system it became.

“Some of the pictures came in between how good I deleted all files.” Now that I’ve run the runamd.cmd file properly it looks like this:” 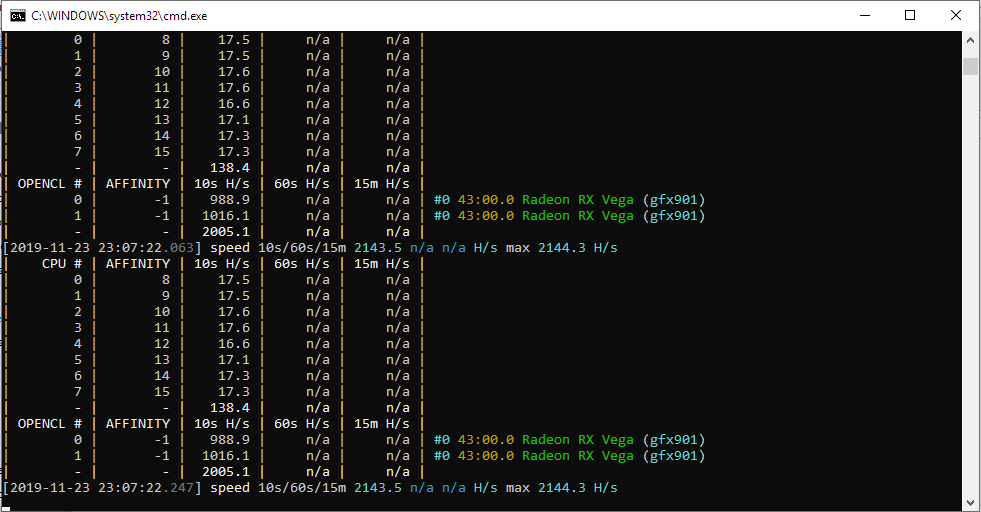 Here is the download. Remember to share this with all miners out there! It’s a significant difference on your computer! And this procedure might be removed with newer versions of AMD Drivers.

This was done to 19.11.3 version of AMD drivers! But even the Blockchain drivers have this same specific. They are thus demanding in your computer about 25% of the CPU!

You can rerun command until you are sure all files are deleted. “run it when 100% installation has completed.”

Huge 800h/s increase! Of what regular speed it wants with 1200h/s that it wants if you don’t use this process. Depending on other coins, it’s faster than 1080ti! VEGA64!

cn.reg in v.3.00 is probably to avoid certain other optional propositions of the program. I still haven’t figured more of the .reg file, which indeed is capable of a slow run. But reporting back to AMD is turned off.
But it as well apprehends the program after a computer restart.

Donate 25% of your income for one week to: 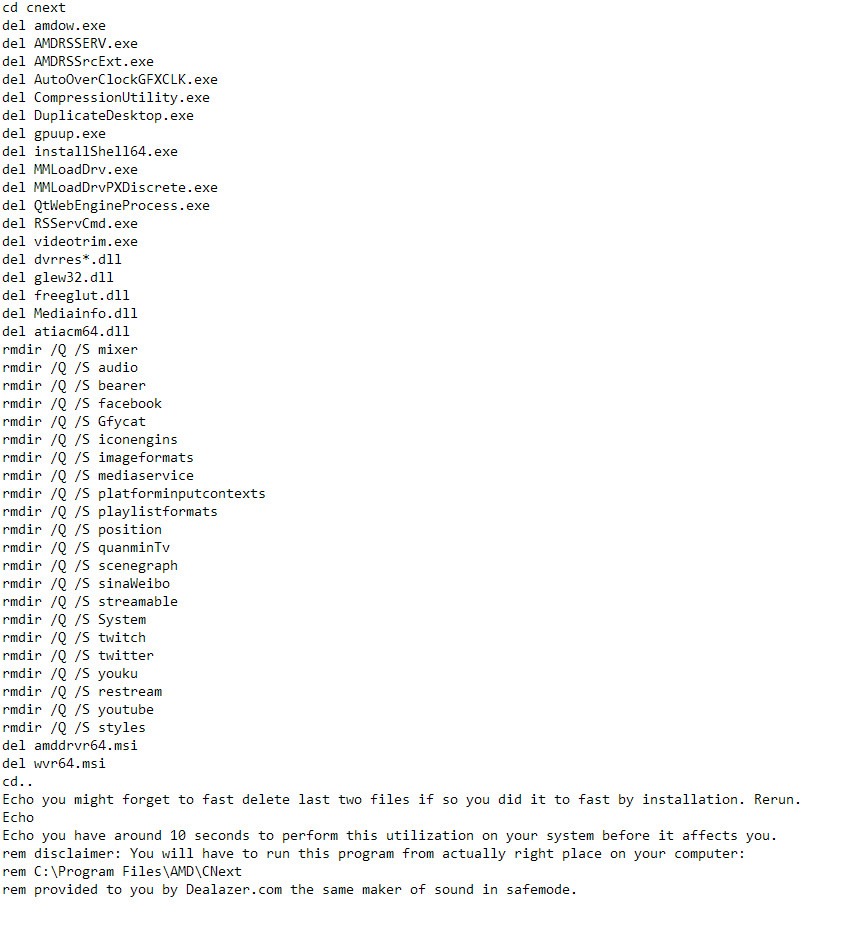 You won’t be able only to use this connect to inside RadeonSettings.exe

This probably was a huge botnet connector

WITH THE CN.reg you get additional more hashing speed. I use clock 1400Hz limit, not 1600Mhz. And 1020 Memory clock. As well as certain few memory tweaks, just a higher speed today. 40% fan, towards 1400Hz limit, is more preferred as it stays 2100h/s throughout the whole day. 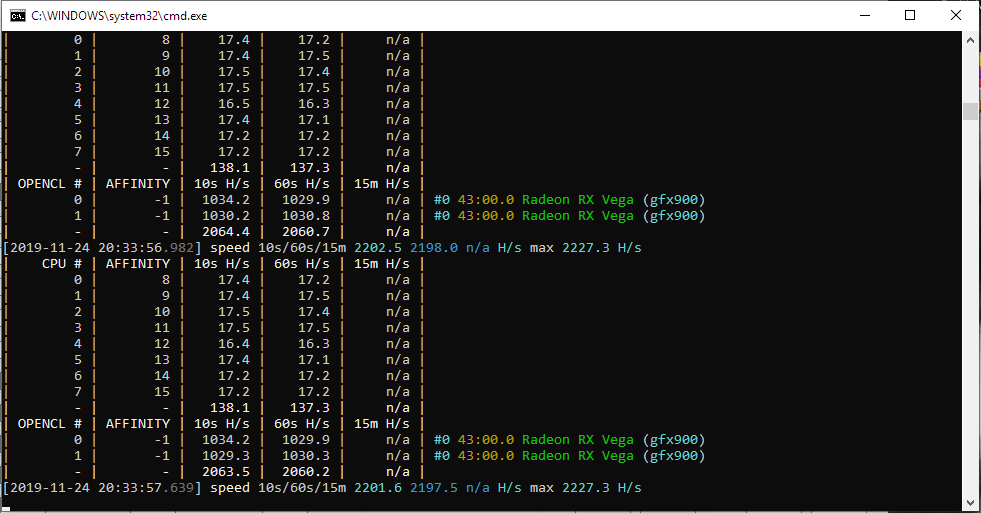 You can as well edit the install manager.cfg in the AMD install folder before installing that file they use: DVR tracking might be video tracking the screen.

Recommended as well is to empty the folder
C:\AMD\Win10-64Bit-Radeon-Software-Adrenalin-2019-Edition-19.11.3-Nov18\Packages\Apps
And just leave VC17RTx64 being there.

Ok! Here you even see the Monero in cn/r Mining before they fork change network at 1200h/s without on and off mining! Like before 600h/s and on and off the by the miner! 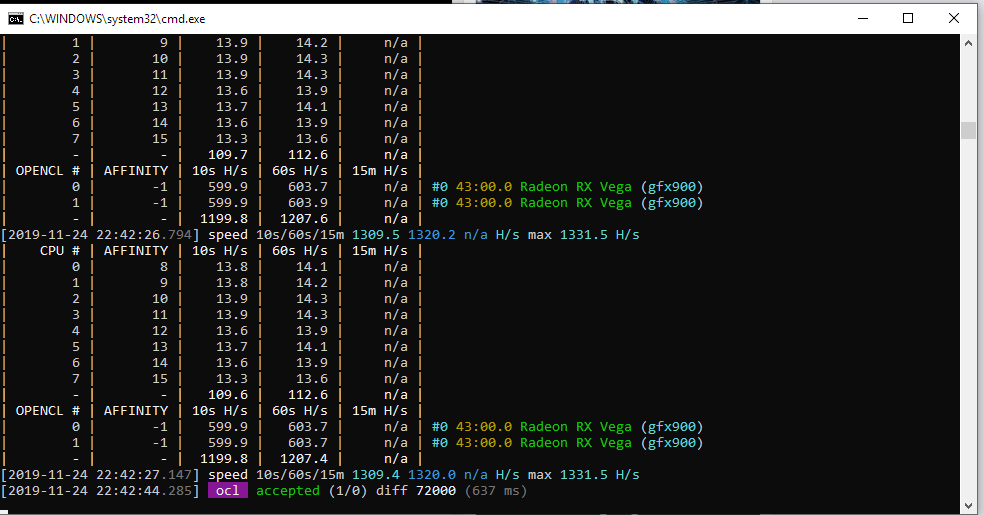 So that’s what was about Monero speaking about botnet to their Network!